What Exactly Does a 6 Figure Salary Get You in New Zealand?

What Exactly Does a 6 Figure Salary Get You in New Zealand?

Wondering what a six-figure salary actually gets you in New Zealand? Will it set you up for the good life, or is $100k not enough to keep up with the rising cost of living? We break down the figures.

When it comes to six-figure salaries, 62% of four-person households in the country earn more than $102,500. While this income sounds high, working for families credits are actually still available to households earning up to $120,500 if they have four or more children.

This indicates that even a high household income may not stretch very far for the average New Zealander with several children and a large mortgage to service. Families throughout the country seem to be struggling, from Wellington to Canterbury.

34% of Christchurch residents earning between $70,000 to $100,000 said they only had enough money to survive, while 11% said they could not cover all their basic needs like food, shelter and utilities.

All these figures indicate that many high-earners are struggling to stay afloat.

The rising cost of living

One of the key factors contributing to the financial struggles faced by many New Zealanders is the rising cost of living.

Because the cost of living varies throughout New Zealand, the definition of a high income also varies. For example, $100,000 will not go far in Auckland or central Otago but could be considered plenty in an area like Southland.

On top of this, income tax will also take a chunk out of your 100k salary. All these factors will affect whether a six-figure salary is really enough.

To explain the cost of living, let’s look at some relevant figures. According to economist Cameron Bagrie, New Zealanders earn less than the OECD average while facing high-income tax and GST.

an average person's after-tax income has only risen by about
$0,000
since 1982, Wages haven't risen in line with the cost of living

Considering the several decades that have transpired, this is far from a significant increase. Meaning that many New Zealanders, even high-income earners, struggle with the rising costs of petrol, utilities and school supplies — all necessities of everyday life.

How New Zealand stacks up against other countries

According to recent research on disposable income and the global cost of the property, New Zealand trails behind other Western countries.

“Our research found that out of the 38 countries analysed, New Zealanders had an average disposable income of $25,074, which puts them 20th in our index of countries with the highest disposable income,” says Noémi Hadnagy of Compare the Market.

“Given that the inflation rate has increased to 6.9% in March compared to the same time last year according to Stats New Zealand, this could mean that New Zealand families have even less to live with,” Noemi says.

“Not to mention thinking of buying a property (which according to our research is already tough enough for New Zealanders, coming 33rd out of the 38 countries evaluated).” 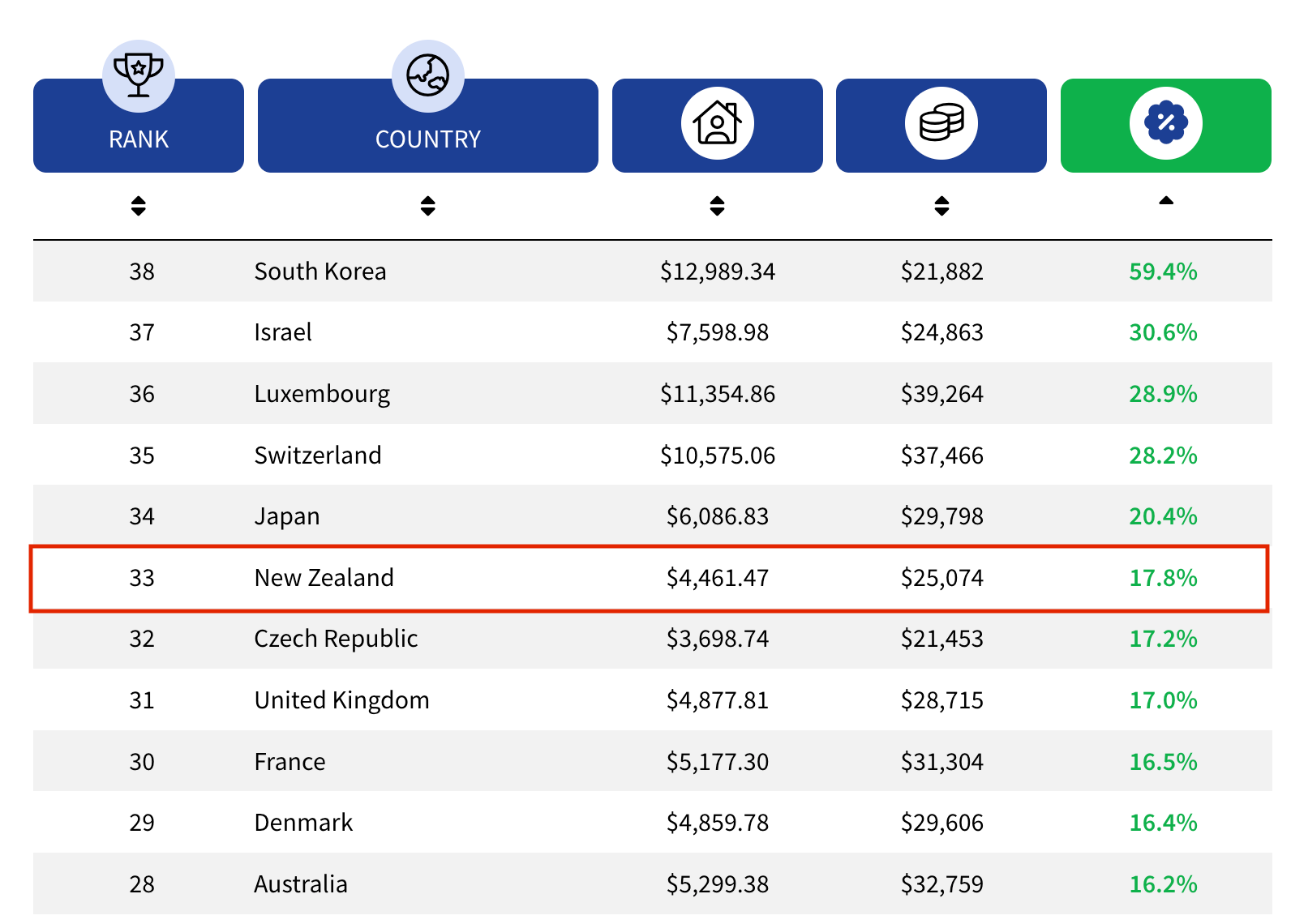 Read the report: The Global Cost of Property

Another problem faced by New Zealanders is lifestyle inflation. With a higher income comes higher spending, with a United States study finding that almost half of respondents earning US$100,000 (NZD$142,000) to US$149,999 actually had less than $US1000 in their savings accounts.

Typical patterns that can be observed when people start to earn more are that they might:

All of which means they have more expenses to keep up with.

With all these payments being taken out of your bank account, it can be easy to feel like you are not well-off, even on a $100k salary. At the same time, the housing market continues to take people for a ride, with house prices and rents being on the rise.

Some budgeting services have found that more people earning over $65,000 a year were turning to them for help, often because their mortgage costs were consuming a large proportion of their incomes.

Economist Cameron Bagrie describes these people as “middle income class of poor” who have enough money to buy a house, but not enough discretionary income left for anything else.

More and more people are also skipping things like dental visits and car insurance, while others are taking money out of their KiwiSaver, (a work-based superannuation initiative to help with retirement savings), affecting both short-term and long-term wellbeing.

Whether 100k is a little or a lot will depend on where you live in New Zealand, whether you have any big expenses like a mortgage or a car payment, and the size of your family.

Unfortunately, many individuals and families making an objectively “good” income are in fact struggling to make ends meet in many major centres throughout New Zealand due to the rising cost of living, stagnant wages and lifestyle inflation.

When it comes to earning the big bucks, some jobs far outstrip others.

A handful of in-demand, highly skilled roles command salaries of $300,000 and over — with #1 often earning millions of dollars a year.

Childcare from Home: How to Set Up Your Home-Based Childcare Business in NZ

Whether you’re looking to become an office administrator, trying to get experience with data entry or just want flexible working conditions, careers in administration can get you there! Administration jobs are becoming…

How to Become a Project Manager in New Zealand

How to Become a Counsellor in NZ: Make a Difference in Mental Health

If you are a good listener, love to help others and have an interest in psychology, then perhaps you should consider pursuing a career in counselling. Counselling is one of the most…

Working from home jobs are rapidly becoming the norm all over the world. The COVID-19 pandemic has left a distinct mark on workplaces, with people realising productivity can happen outside of the…

8 Best Career Paths for People with Depression and Anxiety

Work is stressful. But when you’re living with depression, anxiety, or other mental illness impacting your mental health, your job can leave you feeling beyond defeated. Running around, meeting deadlines, sending emails…